Meaning is only found when you go beyond meaning. Life only makes sense when you perceive it as mystery
Anthony de Mello

The dark night of the soul is the term used to describe a state of being that is, not unlike most states of being, typically hard to describe. It refers to the death of the ego. It is the perilous place where lost souls wonder deeper into the void, farther from the light. It leaves seekers everywhere, myself included, thinking “what the holy s**t just happened.”

Everything that you ever feared lies waiting with slavering jaws, waiting in the dark to pounce and snap at your heart. Every reminder of who you are not surfaces on the restless waves of your mind’s ocean; a storm of epic proportions sent to shipwreck every idea of who you think you are. And all of the time where is the light? Why has it forsaken you at this most cruel and enduring time?

The dark night of the soul is not a part of every seekers experience, but for those who do experience it it is a relentless battering of darkness, and at the time it just doesn’t make any damned sense. It seems that no matter what you do you just cannot click yourself into place.

Often, as if responding to the internal battle, the events in your life seem to conspire to push you further to the brink of chaotic despair. The web of life knits you an unfavorable situation, one which is designed to back your ego into a corner, giving you literally no option; no foreseeable way to overcome your dark night with your own will.

The ego, not best pleased to be backed helplessly into a corner by an unseen force, kicks back. “I can fight this,” it cries, “I can find a way to win this battle.” The more out of line the ego gets (and remember the ego is not one for standing in line), the darker the night becomes. With one last kick and a thrash the ego yells, “no force is more powerful than me… I am in control of my life… I don’t deserve to feel like this.” 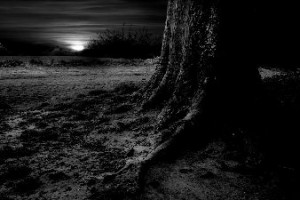 Of course, the cycle of the dark night of the soul perpetuates with every skirmish. Every dagger that your ego thrusts out wildly into the darkness is met with an equal measure of force, until finally you lay defeated. In the darkness, void of all light, and with even faith slipping from your grasp, you admit that there is nothing you can do. All of the suppressed pain and heartache comes to you in thoughts, and in tears. All of your wrongdoings are felt deeply within your own being. All of your dishonesty becomes a truth so honest, and so vulgar, that you crumble at the sight of it. And all of the while there is no light…

And then, in your full surrender; in your admission of defeat; in your humbling prayers and in your darkest hour, you see light again. Distant and vague but unmistakable and beautiful, you see light, and you know then that you are not alone. Gradually, or rapidly, you return, to the higher power (or higher self) that you once knew. You realize that is was there all along, and that it was your own blindfold that had prevented you from seeing it, your own ego that had prevented you from feeling it.

The dark night of the soul is a process of reconciliation between an old you, and the you that will be reborn. It is a death within a life. It is your rebirth.

From the moment of full surrender you are reborn, and that is the whole point. You must surrender even your own self image, your own notion of who you are before you can truly come to know yourself.

Only when your dark night is over can you truly appreciate the benefits and growth that it brings about. What seemed at the time like the meanest of enemies, is finally recognized as the best of friends. The pain and emptiness that you had to experience are recognized as a part of a process; a stripping away of the ego that allows you a more constant access to your true self, and to the higher source that you had previously been allowed only a glimpse of.

It was your own ego that stood in the way of your journey. It was your ego that kept you enveloped in the darkness for so long. Its struggles and demands kept you there. Its desire to control perpetuated the bondage.

My Dark Night Of The Soul

The dark night of the soul usually occurs after a period of sporadic and rapid spiritual growth. New knowledge and a higher access to altered states is met by resistance from within. The new knowledge that you have so rapidly gained forces your very idea of yourself into a process of destruction, because the higher knowledge is somehow not compatible with who you thought you were, with your beliefs, and with how you lived your life previously.

My own experiences were actually rather typical, in terms of the process itself, although it didn’t feel this way at the time. Here is the story:

In the summer of 2014 I experienced a mystical growth so profound that it literally blew my mind. I lived for months in an environment which stimulated spiritual growth, and “weirdness.” Mysticism became a societal norm. I learnt a lot about myself, I learnt new techniques for connecting with the Earth, which I came to know as “Bump Consciousness” and I experienced many things which I struggle to describe to even the best of friends, and which I would have little-no chance of explaining to my family.

I was then thrust back into a normal society, and into the grip of the UK’s biggest and most economically driven cities: London. Suddenly lacking the social support of anyone who I had experienced the spiritual growth spurt with, and lacking anyone to validate or even communicate my knowledge to, I was left alone.

With nothing much to occupy myself, and lacking real nature to retreat to, I began to feel my head spinning every time I was without company. It was easy enough to mask it and forget about it when I was in the company of other people, but on my own there was no hiding. I would lie down often, sometimes out of dizziness, and the heaviness of my own thoughts. I wouldn’t get out much. I even felt a little paranoid. At first I thought it was only a bad patch, a mood swing that would last only a couple of days. But it turned out to be a totally different feeling…

There was no solution. I felt trapped. I didn’t know what I wanted out of life, which had never bothered me, but right then it was too much. I felt betrayed, but I didn’t know who by. Perhaps God? Perhaps my own self, or whatever that sublime force might be, the one that I had come to know so intimately. It was all missing, like a lover that had fled in the night, leaving not even a note for closure. I started to feel like I was losing what I had come to know and love, and everything I had learnt was slipping away from me, as my soul plunged further into the darkness.

Is Before The Dawn…

Then, in one beautifully liberating moment, I surrendered. I did not give up on life in that moment, I did not think myself, or the world to be hopeless. I simply said “have it your way” to whatever that force may be. I gave up on my need to control. My ego stopped thrashing. When it stopped thrashing it became still, and then I became still, and then not a second later I saw the light. I felt peace. So, I welcomed it back. It came closer. And then I knew again; it was always there.

Every day which followed was new to me. I was reborn, and I was settling into a refined and reconciled self. I left London and I was lifted. London had provided a great backdrop for my dark night of the soul to take place.

I cannot really convey the personal changes that took place, but it made me think of a widely stretched elastic band. It’s like the rapid growth had stretched my sense of self to a new level. The ego had rebelled and contracted, afraid to be pulled apart. Eventually a balancing point was found, a meeting place for individual will and spiritual energy; a synergy of self and higher. The dark night of the soul is best described as a blessing in disguise.

I hope that anyone that has, will, or is experiencing a dark night to take comfort in these words. Know that you are not alone, and that you will emerge as a more balanced person, capable of knowing the divine intimately. Remain positive even when times are hard. Most of all… Surrender…

Special thanks to “The Mystic” for their brilliant article on The Dark Night Of The Soul. It was enough for me to confirm that my own experiences could be described as such.

Warning: count(): Parameter must be an array or an object that implements Countable in /homepages/36/d404756469/htdocs/FractalPanda/wp-includes/class-wp-comment-query.php on line 399

3 Powerful Plant Medicines You Might Never Have Heard Of

Beyond The Diet Fads: 5 Ways To Boost Nutrition